Riksfalto (Japanese: リクスファルト, lit. rikusufaruto) is the general of Deep Sea Dolphin. She is a primary antagonist in Slayers: Knight of Aqualord.

Riksfalto is extremely frank in personality. She hates deception and lies, and will say whatever is on her mind. For those familiar with Xelloss, Greater Beast Zelas Metallium's priest, it is easy to contrast the two mazoku as opposites.

Riksfalto carries a large, three-pronged sword that resembles a trident.

She mostly uses brute force in combat. Her level of power is illustrated by the fact that she took a direct hit from Lina's Dragon Slave and wasn't even injured. She also fights a couple of times against Lyos, but she is finally defeated when the Knight of Aqualord awakens. 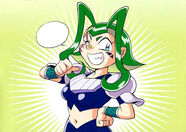 Riksfalto in SD style
Add a photo to this gallery
Retrieved from "https://kanzaka.fandom.com/wiki/Riksfalto?oldid=13500"
Community content is available under CC-BY-SA unless otherwise noted.