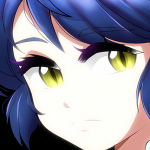 I've been a fan of Slayers since I was 12 years old and role-playing Sherra, with a group of idiots who were all Slayers fans as well, on AOL chat rooms back in ye olden 90's. We're all still buddies nearly 2 decades later (holy crap, now I feel old). On that note, I don't think I'll stop being a fan anytime soon.

I'm sherrasama just about every-dang-where on the internets (except the forums here, which inexplicably lost my username so it's *gasp* just "sherra"). My stupid art is up on deviantART.

SU and KanzakaDex and all you morons' fansites have been a huge part of my life, so I want to give back as much as I can. I have some working knowledge of Japanese, but not enough to do anything very quickly, so don't expect any miracles. I will do my best to try to fill in some gaps around here, however.

Retrieved from "https://kanzaka.fandom.com/wiki/User:Sherrasama?oldid=12159"
Community content is available under CC-BY-SA unless otherwise noted.